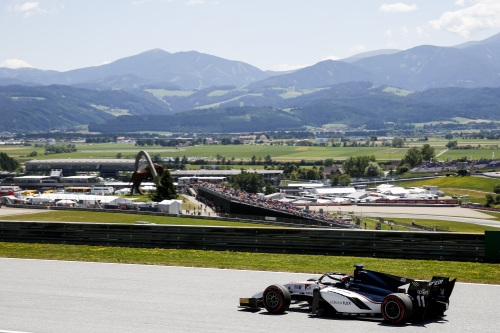 • Track temperatures rose to a peak of 49°C during Saturday's race
• One of the highest degradation tracks of the season
• Fourth top-ten qualifying of the season
• Feature race overtakes ultimately overshadowed by pace and tyre issues
• In a last five-lap dash, Callum passed eight cars to finish the Sprint Race inside the top-ten

"Although our Free Practice had gone well, in quali for some reason the car didn't have the pace across the whole lap and I also feel I didn't get the maximum out of the car. This meant we weren't in the fight for pole and had to settle for P10.

The Feature Race began well, the first lap was good and the initial stint was decent. The pit stop was good and I came back out to make some clean overtakes. With about 15 laps to go, I got stuck behind a driver on the alternative strategy and pushed too hard to get passed – this killed the tyres and the grip just dropped off massively.  For us as a team, we weren’t close enough to the optimal set up for a high deg track like Red Bull Ring and my own part in managing that, meant it just wasn’t an ideal race.”

In Sunday's Sprint Race, I had some contact at the start and lost four or five positions so I dropped to pretty much the back of the field. I adapted what I was doing with the car to save more tyre in the early phases, but again as in race one, I had no speed through sector one which is a critical sector for overtaking. I therefore again had to use a bit more tyre than was ideal on such a high deg track to compensate.  With a few laps to go and pitting under the Safety Car, I was back out and able to push from the back with nothing to lose, coming from P17 to P9 in about 5 laps which was a good way to conclude the race."