Pole, win and championship lead for Ilott in Monza 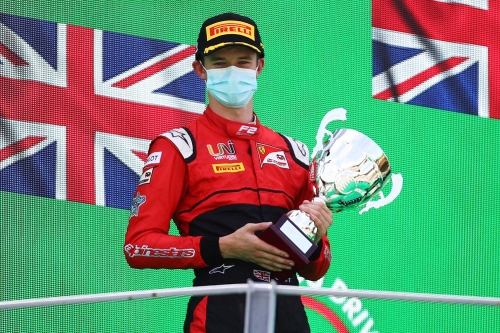 • Callum secured his fourth pole position of the year and back-to-back F2 poles at Monza
• Making a strong start, Callum controlled the Feature Race until the pitstop
• At the pitstop, Callum's car stalled but he was able to restart and rejoin the race
• Callum made a fantastic recovery from P21, overtaking several drivers to finish in P6
• Starting the Sprint Race from P3, Callum drove another strong race and crossed the line in P2
• Callum was then later promoted to P1 after race winner, Ticktum, was excluded
• Callum is now back in the lead of the championship standings as the series moves onto Mugello, Italy, this weekend

In all honesty, I was a little surprised to be on pole as I felt my lap was good but I wasn't sure if it was going to be good enough for pole position. Luckily I was wrong and I was able to grab my fourth pole position of the year which was the perfect way to bounce back after a tough weekend in Belgium.My start in the Feature Race was really strong and I was able to put myself into a strong position at the front early on. Even without having the DRS, I was able to keep Mick (Schumacher) behind me, Unfortunately, we had an issue at the stop and the car stalled. I didn't do anything differently with the clutch and throttle but sometimes these things happen.

After the stop, I was pretty annoyed at myself and I was on a mission to get back up to the front. I pulled off some good overtakes and my pace was really strong. I managed to bring it back for a P6 finish, which was a great result after the stall, and being last on track in P21, but I was still very frustrated as I knew I had the pace to win.

In Sunday's Sprint Race, I tried to manage the pace early on but then Dan (Ticktum) and Louis (Deletraz) started to push quite hard at the beginning. This meant I had to use a bit more of the tyres than I wanted at that stage. I still managed to have good pace towards the end, especially over Louis, so I was able to get past him into P2.

Taking the finish from P2, then inheriting the win, made for a fantastic Sunday and a great recovery from Saturday's race. It was almost a perfect weekend but it's still good to be back in the lead of the championship and I'll be fighting hard to stay there.