Mixed results for Ilott at Mugello 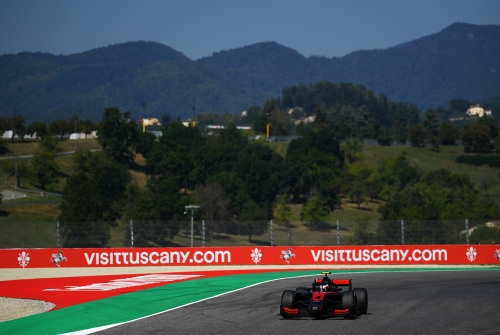 • Callum qualified in third place, his eighth top-three start of the season
• After losing places at the start of the Feature Race, Callum began to fight back through the field
• A strong stint brought him back into contention until a Safety Car deployment
• Contact between other cars left Callum with damage and forced him to pit, recovering to P12
• Starting the Sprint Race from P12, Callum staged another strong drive to claim P6
• Callum sits second in the championship standings, just 9 points behind Schumacher

"I certainly wasn’t expecting a top-three result in qualifying as I had traffic on my fast lap but I was able to put together a really good middle sector which was enough to push me up there. All in all, I was really happy with the session in the end and it was a good way to carry the momentum forward from Monza.

I struggled off the start line in the Feature Race and lost ground as I dropped to seventh so it became a bit of a recovery drive as the race went on. I was making some really good progress back through as the gap to the leaders began to come down. Then the safety car came out and bunched us all back up again. On the restart, I simply got caught up in the back of the accident ahead and damaged the front-end. We got it back to the pits and changed the nose but there were only three laps of racing left after the second safety car so I could only make so much progress back to P12. These things happen but it perhaps wasn’t the result our pace deserved.

Starting from P12 for the Sprint Race, I was confident I could push forwards. It was a tricky getaway again, I lost a few places off the start and dropped back to P16 but was able to make a lot of moves to put myself back in P12 by the end of the first lap. I then just kept chipping away at those ahead and pulled off a few overtakes to climb the order. It was a good drive to get to P6 and bag another four points for the championship.

A huge thanks to the team once again for all their hard work, we did everything we could and showed some great pace but things just didn’t fall our way. We’ll be pushing just as hard again in Russia."