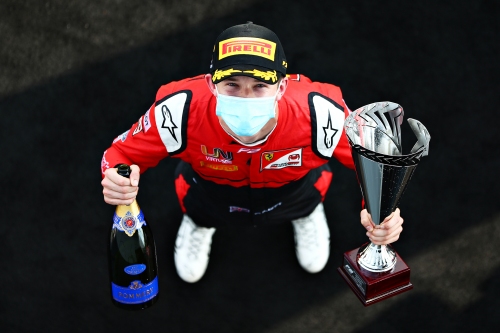 Callum Ilott had the measure of his rivals in today’s FIA Formula 2 Feature Race as the Ferrari Driver Academy star converted pole position into a controlled and assured race performance to claim his second FIA F2 victory.

Callum qualified on pole position on Friday afternoon - his second pole of the season and fifth consecutive top-three qualifying result. Having shown strong pace in both races at last weekend’s British Grand Prix, the signs were there that Callum could claim a strong result.

The 21-year-old made a strong getaway from the start line and immediately began to bridge a gap to second-placed Christian Lundgaard. With tyre management a vital component in a driver’s arsenal, Callum relinquished any worries about degradation on his soft Pirelli tyres and, in stark contrast to his nearest rivals, extended his first stint by an extra lap.

That decision would pay off handsomely as Callum rejoined the race from his mandatory pitstop a clear ten seconds ahead of Lundgaard, who was already starting to struggle with his Pirellis.

From there it was a clean and consistent drive to the chequered flag for Callum, as he swooped past his rivals to ascend the order with ease and finish a clear eight seconds ahead of Lundgaard behind. As a result, the win marks Callum’s second victory in FIA Formula 2 following his triumph in Austria and means the Brit reclaims the lead of the championship and now heads Lundgaard by fifteen points in the overall standings.

Callum will start tomorrow’s reverse-grid Sprint Race from eighth place and will look to replicate the pace and performance he displayed in today’s event.

Callum Ilott: “It’s great to come away with the win! It was quite a long race to be honest but I did everything right and I got the start right. I had to extend the first stint because of where we are in the pit-lane but it worked out well in the end though and I actually extended the gap to Christian."

“From there, I just kept it going and kept it on track. It wasn’t easy with the wind going in a different direction to before but it feels really good to get the win. I should have done it last week, but it couldn’t have gone any better this week. I’m really happy, and a great job from the team so a big thanks to them as always.”