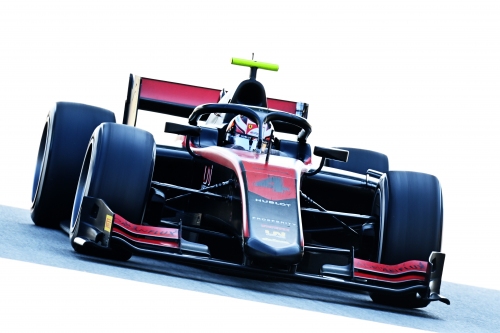 "It was a great call by me and my engineer to go out early on the final runs in qualifying and get a good free track. This worked perfectly and I put in a good lap. What can I say? It's pole and it's always nice to go into the weekend with a good job done already.

Saturday's Feature Race was extremely frustrating. I lost the start to Shwartzman but knew I had the pace to get the position back so just kept patient. I passed him a few laps later and after that, it was the perfect race. My pace was strong and we were managing the tyres really well but then the safety car came out.

We knew a few drivers on the alternate strategy were on fresher, softer rubber, so we had to cover them off or I would have been a sitting duck. I came back out in P2 and after the restart, was pushing hard to get back the lead.

Fighting with Tsunoda, Matsushita was able to take advantage of our scrap and managed to get through. I then tried to go around the outside of Matsushita but was forced to back out, which cost me another couple of places to Shwartzman and Mazepin and I eventually finished P5.

In the sprint race, I got an average start off the line but saw the opportunity to go to the outside of Schumacher and stuck with it and really enjoyed that move! I was running well in P3 and everything seemed to be going fine until the last ten laps. Then, the tyres just dropped off a cliff and I lost so much grip.

From then on, I was struggling to match the guys around me and dropped down the order. There's definitely a lot for us to look at and work on before we head to Spa as we just didn't get it right as a team this weekend and were caught out by the tyre degradation. I still managed to keep the lead in the title fight and maintain the gap, so I can't be too disappointed with how my weekend went."