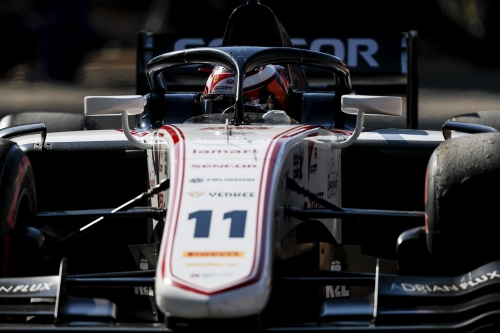 • Callum secures a P5 start for the Feature Race
• Callum delivers his third top-six qualifying in a row
• Rapidly regains positions in the Feature Race after a four-second pit stop issue, but a racing incident leaves him with a DNF
• Battled up the order in the Sprint Race from P15 to finish in the points in P8

"The good news is we delivered strong improvements in pace and performance this weekend, but frustratingly luck wasn’t on our side for converting the pace into points. It was a bit of a messy qualifying session with the flags, and whilst a P5 is good, I feel I could have got even more out of my lap.

After the Feature Race, I was disappointed for me and the team that we weren’t able to deliver the strong result that we were capable of. We were unlucky to have a mistake at our pitstop and we lost quite a bit of time. After that, I was having to take more risks to recover the positions. I was pushing for the podium but made a mistake trying to pass Matsushita and that ended our race. However, the pace of the car was great and I was enjoying the overtakes.

I think I got the most out of Sunday's Sprint Race that I could have, coming from P15 to P8. I had quick cars around me but I think we did a good job and showed the pace was strong, with some clean moves. It’s a shame about the Feature Race because we would have been in an even better position, but to get one point out of Sunday's race was a good effort. We know the car is strong so now I need to focus on replicating that same pace when we head to the Red Bull Ring."