First podium of 2019 for Callum Ilott 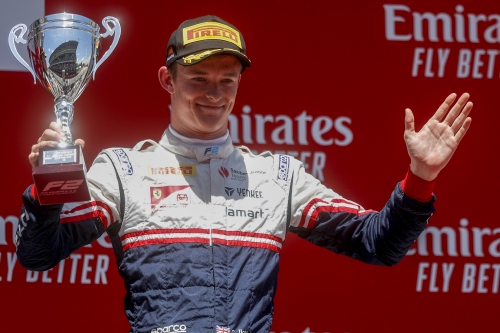 "​After two difficult opening race weekends it feels great to finally get some points in the bag and pick up my maiden F2 podium!

The weekend started well and we made some good progress with the car in free practice which definitely helped when we got to qualifying. I was really pleased with my lap in qualifying and definitely felt I got everything out of the car which is always positive.

Saturday's sprint race was a difficult one. I didn’t get the best start and was on the backfoot but made the positions back by running around the outside of Turn 1.

Managing life in the tyres was the key to a good result and we struggled more than expected early on. I got stuck behind Matsushita, which hurt the tyres even more, and probably could have managed to battle for P5 and P6, but P8 is still a good result and meant pole for race two.

For the Sprint Race, we changed the whole clutch after noticing an issue in race one. So all the procedures that worked in race one didn’t then work for race two. That meant again I didn’t manage to get the best of starts in the Sprint Race but I was still with the leaders.

After the safety car, I managed to get past Anthoine, then it was just a case of managing the pace. I knew Luca was catching and pushed hard but the tyres gave out with a couple of laps to go and I couldn’t hold him behind.

It’s my first podium in Formula Two and I’m really happy with the direction we’re heading in so we'll be looking to carry the momentum to Monaco."