Podium, Points and P2 in the Championship in Sochi for Ilott 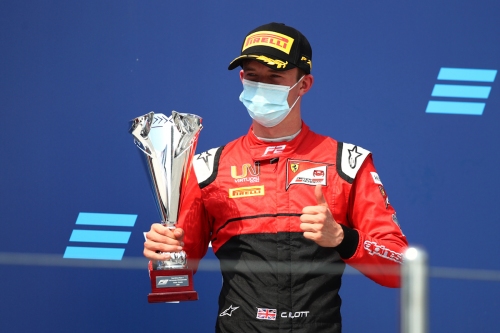 "Quali wasn't the best as the first run was really difficult because everyone was making mistakes and ended up blocking each other. I think that in the two laps that I tried to do, I ended up getting blocked three and a half times, so I didn’t really get much of a run in the first run. I think I was still somehow in P11, and that was after going off the track twice on my best lap to try and get around people.

Because of that, I didn’t really have a great feeling for the car when the tyres were at their best, but we made some changes anyway and went back out for the second stint. The first lap was good, not perfect, but P4. Then I improved a little bit again and retained P4. It was a really messy session and not really what anybody wanted, but it wasn't too bad for us in the end. I think I made the most out of what was going on.”

“After the start, which wasn’t super-fast, I worked to play catch up a bit on the first corners. Then I got held in the pitstop when PREMA double-stacked, which we didn't really expect. I had to wait another two seconds in the pitstop, which meant that when I came out I had Jehan (Daruvala) right behind me. I had to push for two laps to keep him behind. He was right behind me, and with cold tyres it's not easy. I overused the tyres on the first two laps. I then had to push to get a little bit of a gap, so I kept using them.

Mick took advantage of Yuki Tsunoda with the pass of Artem Markelov, and so then after that I managed to get past Yuki because he struggled a bit with the tyres to get them back up from an excursion onto the marbles. I think I got to 1.2 seconds behind Mick, so I was really close to the DRS, and every lap I felt like I could do it. I spent three or four laps closer than I should have really been to Mick. It just killed my rears.

In the last two laps I started to struggle but I was holding on. Yuki was very fast at that point, and I think he learned from his earlier mistake in how to get past someone out of turn two, and that was me. I was very close to Yuki but still on the inside. I managed to get a bit of aerowash, and drifted onto the marbles. The tyres were a disaster after that but I managed to defend well and hold Ghiotto off going over the line.”

“In the Sprint Race I got a reasonable start but with how track positions worked out into turn two I ended up getting tagged from behind. Unfortunately the race suspension meant I didn't get the chance to make up ground over the restart and the rest of the race, which is a bit frustrating. I am glad the guys are Ok as it was a pretty high speed crash. There was more to come for this weekend for sure, but I am looking forward to getting out to Bahrain to continue to fight for the championship title."

Photographic credits to Formula Motorsport Ltd/@GettySport and thanks to Brothermailer